License plates, number plates, registration plates; whatever you call them they have been a ubiquitous element of motorcar and bike ownership since, well, the emergence of motorcars and bikes. First introduced in France in 1893 this regulated system rapidly spread throughout the world as both local and national government bodies rushed to keep track of these new fangled machines. Until a semblance of standardisation was introduced globally in 1957 (resulting in three basic plate dimension standards) there was a mind boggling array of plates produced using any combination of numbers, letters, shapes, sizes and materials that individual jurisdictions saw fit to implement. Early plates were produced in porcelain baked onto iron or ceramic, whilst cardboard, leather and rubber were also experimented with. During World War Two, due to metal shortages, some U.S states even started issuing plates made from pressed soybean fibre.

As with other items related to cars and bikes, number plates have become a popular collector item within the automobilia hobby, with rare examples sometimes fetching five and six figure prices at auction.

The United Sates in particular has provided collectors with an eclectic range of designs to choose from due to each state being responsible for issuing its own distinctive plates. Some are quite valuable too, demonstrated by a private sale a few years ago of an extremely rare 1921 Alaska plate, one of four known to exist, for $55,000. 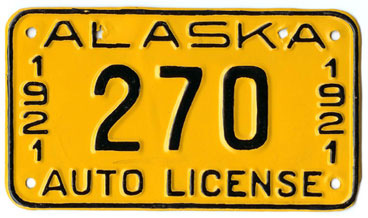 Surprisingly, more recently issued number plates can sometimes command far greater sums, especially if they possess certain number or letter combinations. At the 2018 Motorclassica Rare Number Plate auction organised by Shannons in Melbourne, a plate with the numerals ‘911’ was snapped up for an astonishing $525,000.

And if less is more in the license plate game than it should be no surprise that a wealthy gentleman from the Arab Emirates decided to fork out around $13 million in 2008 for a plate that simply displayed the number ‘1’.

Of course these two examples represent the extreme high end of values whilst the vast majority of old and not so old plates can be picked up for a few dollars at a local swap meet or online. And this is what constitutes the core of the hobby; car and bike guys and gals searching for that certain plate with that certain shape or palate of colours, or from that certain state, that catches their eye.

Based in the U.S, the Automobile License Plate Collectors Association was founded in 1954 and is the largest organisation of its kind in the world. Its 3000 plus members, representing all 50 states and 19 other countries, attend annual international conventions as well as dozens of regional meets throughout the year. In Australia the hobby is represented by the over 600 member strong Number Plate Collectors Club of Australia, founded in 1981 by nine enthusiasts.

So whether you’re a serious collector with walls covered in obsolete, and obscure, rectangles of tin, or a casual enthusiast looking for a couple of fun pieces to decorate your garage, the hobby is well serviced by an increasing number of like minded folks.